skip to main | skip to sidebar

Wendsday and Thursday, the 2nd and 3rd of December, the offices of the Secretary of the Environment and the Secretary of Energy in Oklahoma held and sponsored Oklahoma's second annual wind energy conference. I actually enjoy the name of the conference, "The Wind Revolution," it sounds new and exciting. According to the conference organizers there were well over a thousand in attendance, or had at least registered.

The event was held at the COX Convention Center in the great sprawling metropolis of Oklahoma City. Seriously,the city is growing.The venue was nice and had plenty of room for the thousand attendees; I must also compliment the production staff; they did a great job making it relatively simple for the speakers and attendees to ineract with one another during the presentations, as well as facilitating the question and answer sessions.

In the spirit of keeping things short, I will only speak about the few portions that were the most important for my concerns. On Tuesday, the second session was led by JD Strong,Oklahoma's Secretary of the Environment. The title of the session: "Keeping it Green, Wind and the Environment." I was surprised and happy to see Mr. Strong show a photo of the advertisement for Lek Trek's and More, a festival in Woodward Oklahoma. 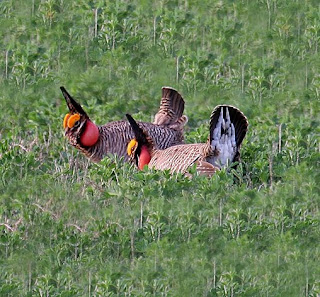 Something I'm proud to say that I have been a part of since it's conception. Mr. Strong provided a very nice overview of the situations in regard to wind generators and trasmission lines, as well as the concerns regarding them and the Lesser Prairie Chicken (photo by Steve Metz)populations in the northwestern regions of Oklahoma. It was a great presentation and a good way to begin the session.

Nexture Energy, which is a daughter company of Florida Power and Light, presented their case about wind energy. They are the largest producer of wind energy in North America with 65 projects, opperating one farm that is in Woodward, and Harper Counties, Oklahoma.

I was a little dissapointed to see that they were still green-washing wind energy. The presenter made several points about it being zero pollution or something similiar to that statement, which I don't agree with. I have spoken with many people and heard their stories, and I have watched one go up myself over a six month period. They most certainly are very impactful, especially during construction. I have also heard examples about pollution post-construction, but have no personal stories of my own. To her credit, Shelly Holmbreck did discuss the ecological surveys they perform while in the planning period. She also mentioned that later this winter there should be peer-reviewed article out in some publication, in regard to wind development and wildlife. That's really all she had to say about it though. I'll have to keep a watch for that article, it should be interesting.

The "Keeping it Green" session went well, and aside from Mr. Strong and Ms. Holmbeck, we heard from Steve Ferrell with Wyoming Fish & Game. He talked Sage Grouse and energy development. He had a lot of great ideas, and the only thing I found myself asking at the end of the presentation was, why is the Sage Grouse,which is fairing better than the Lesser Prairie Chicken, getting the protection that it needs and this other species is struggling so badly?" Apparently organization is the answer to that one; Wyoming and its public,surmmounting a four year, 95 project onslaught to beat back poor energy development planning and skepticism. With the Sage grouse taken care of, so to say, isn't it time to give the prairie chickens and the short/mixed grass it's spot in the sun? I think so!

Unfortunately/fortunately a session on the second day included two Oklahoma landowners. Let's just say that one landowner gave us some things to think about, and had a lot to share. Without calling names, the other gentleman left the crowd a little bewildered, and certainly dissapointed the other landowners that I was to later talk with. It was as if the planners wanted to show us both the good, and the bad side of the western Oklahoma landowners......I'll just leave it at that,
before I light a fire I really don't need to start!

Perhaps the most important session, personally and professionally, was hearing the representative from Southwest Power Pool. They are doing most of the planning for what is happening in western Oklahoma. We recently found out that the company was planning to run a trasmission line through the heart of the eastern portion of the Lesser Prairie Chicken population, virtually cutting the vast native prairie in half, and also running through or very close to the Selman Ranch Important Bird Area, and the Cimarron Bluffs and Hills Wildlife Management Areas,all of these sites harbor a good local population of this species. After his presentation, we were allowed to ask a few questions. I stood up and called the company out, seeking an explanation for this proposal for which we are so concerned. I got a good answer, the placement was not their concern. They are responsible for planning, basically trying to figure out how to get the power from point A to point B; the placement lies in the hands of OG&E their very general geoghraphical maps don't really help us when trying to figure things out on the ground. I hope OG&E will keep to their current techniques and will choose to relocate the route a little further east; find the extra money! Avoiding the LPC's and the beautiful native prairie that supports them.

Thanks for the comments. I am certainly in favor of wind, although I think it is important to realize that it is not going to fix our current energy crisis. I think the point I was wanting to get across was that we need more regulation in regards to wind energy, that it is not the "green" answer we all thought it was; although it could be if persued properly. Thanks again, and stay tuned it looks as though this blog will take of in 2010!

A blog presented by past fellowship recipients of the Toyota and National Audubon Society's TogetherGreen Fellowship. Forty devoted, inspired, and enthusiastic individuals from across the United States. Toyota and the National Audubon Society sought to recognize and nurture these individuals who were contributing to environmental conservation, restoration, and movement diversification. This blog serves as a repository for notes about continuing projects, thoughts and view points (varied) concerning current environmental topics and issues.